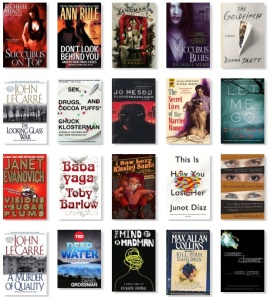 In 2013 I read one hundred and ten books starting with Ian Fleming’s Thunderball and ending with Richelle Mead’s Succubus Shadows. If you’re interested, here is the full list of books I read. Why 110? Because that was the number I assigned myself in the annual Goodreads Challenge. In 2012 my goal was 100 books and I read 106. Flush with my success I got cocky and set a goal of 110 books. Was it difficult? Yes. I spent much of the year behind schedule and I read more graphic novels (7) and Kindle Singles (10) than maybe I would have if I wasn’t playing catch-up.  My goal for 2014 is a reasonable–for me–100 books.

Here are the highlights of what I read.

The Cuckoo’s Calling by J.K. Rowling writing as Robert Galbraith
I’m not a Harry Potter fan (sorry) but read this after Ms. Rowling had been outed as the author. Mystery is my genre of course, both for reading and writing and this is a fantastic mystery with an awesome new sleuth, Cormoran Strike. It’s so good, that at one point I put down my Kindle and contemplated giving up writing. That has never happened before.

Life After Life by Kate Atkinson
You’re probably sick of hearing about this book as it’s on everyone’s Best Of list. I probably would have been turned off at the hype, but I have read all of Atkinson’s other books (and am particularly enamored of her Jackson Brodie series) so I wasn’t about to miss this one. But wow, it lives up to the hype.

This is How You Lose Her by Junot Diaz
Diaz’s book The Brief Wondrous Life of Oscar Wao was the first thing I read on my very first OG Kindle and it won the Pulitzer Prize, so I’m always up for reading him. This is How You Lose Her is billed as a collection of stories but it reads like a novel. I read it while traveling and a woman who was probably in her seventies asked me how I liked it. She was interested in the Dominican Republic and was sort of lukewarm on his prior book. “Too dirty?” I asked. She waved that idea away with her hand. “Not too dirty for me. I’ve read Henry Miller.”

Our Kind of Traitor by John le Carré
Well, it’s le Carré, who ranks among my favorite living writers (also Chabon, Rendell, Murakami, et al). I read quite a few of his books this year and will continue in 2014. He’s just brilliant. Even the books with kinda crappy stories are worth reading (I’m looking at you, The Looking Glass War). I didn’t want this to end.

Dark Places by Gillian Flynn
Gone Girl gets all the attention, but her sister is hotter, darker, and…just trust me. Actually, all you need to do is read this sentence: “I have a meanness inside me, real as an organ. Slit me at my belly and it might slide out, meaty and dark, drop on the floor so you could stomp on it.” I mean, Jesus. I will go anyplace Flynn takes me.

Best Book in a Series

Let Me Go by Chelsea Cain
The sixth in the Archie Sheridan Gretchen Lowell series, Cain is at the top of her game. Every page is taut and perfect. If you like crime, serial killers, Portland, or words being arranged in compelling and intense ways by a talented writer, start with Heartsick and bid your free time farewell.

Georgina Kinkaid by Richelle Mead
This series is one I’m embarrassed to like so much. Apparently it falls into the genre of Paranormal Romance which is pretty fucking barfy to me. But the books are about a succubus in Seattle. Georgina goes around having sex with random dudes in order to steal their life force and feed her own immortality. She’s sexy and sassy and is incapable of minding her own beeswax when trouble arrives. She’s like a shape-shifting, immortal Lexy Cooper. There’s usually a point about three-quarters of the way through in which I’m anxious for it to be over, but then I come around again at the end, and download the next in the series.

Simon Serrailler by Susan Hill
This is the woman that wrote the shart-inducingly terrifying The Woman in Black. This series is not scary, but it is gripping. If you took out the crime and put it all in one volume, a publisher might sell this as an “epic family saga.” I mean, the crime-solving at times takes a back seat to the characters and their relationships and you don’t even care because these people are interesting as hell.

Silent Echo by J.R. Rain
I got this for free through some sort of Amazon/Goodreads promotion. It wins the booby prize for the biggest pile of shit I was able to finish reading. It’s so, SO bad. The repetition, the homophobia, the mystery that wouldn’t challenge Encyclopedia Brown. Only good part was the Lazarus Dick: dying man who is too weak to sit up or even smile manages to bust out one last boner for his simpering grief counselor in the worst sex scene I’ve ever read.

Virus Thirteen by Joshua Alan Parry
I picked this up in an airport because I LOVE pandemic/emerging virus novels. And I thought, “Wow a doctor wrote this, it will probably contain lots of the awesome, gory medical details that I crave.” NOPE. He doesn’t even describe the symptoms of the ‘superflu’. Also, his hero gets a DNA sample from hair he ‘trimmed’ from his children’s heads. Don’t ya need the root bulb for DNA, doctor? Even I know that. The characters are two-dimensional, the dialog is for shit. Avoid this noid.

Sex, Drugs, and Cocoa Puffs by Chuck Klosterman
I had to force myself to finish this pretentious rambling shit show. I hated it so hard that if I ever cross paths with Chuck, I will kick him in the nuts.

David and Goliath by Malcolm Gladwell
Maybe his publishing contract required one more book. I’ve enjoyed all his other offerings but this was terrifically underwhelming. A big, fat, meh.

In One Person by John Irving
This is very derivative of his earlier work. Owen Meany in particular, but there are also shades of The World According to Garp and a hint of Hotel New Hampshire. Has Irving said all he has to say? Why does he keep returning to absent mysterious fathers, wrestling, children with strange voices, and lecherous abrasive girl cousins? The gist of this book reminds me of a song from the movie “Team America: World Police,” Everybody’s got AIDS AIDS AIDS.

NOS4A2 by Joe Hill
I loved some of the characters and wish I’d met them in a non horror novel. This wasn’t scary at all. I found myself skimming. In my opinion this is Joe Hill’s weakest novel. Heart Shaped Box scared the shit out of me and I’m a huge fan of Locke & Key. I liked Horns a great deal. This one just didn’t do it for me. Maybe I’m over the genre, which of course isn’t Joe’s fault.