Let’s talk about pacing, i.e. the action in your novel. Does it start slow and build to an action-packed climax? Do you hit on your main themes in a regular pattern? Do you sprinkle humor here and there?

I wasn’t sure how I did it. I’ve had readers comment that they like the pacing in my books, so I guess I was doing something right. But to be honest, I don’t consciously think about pacing much. Well, except for the first Lexy book in which I was convinced each chapter needed to be 5,000 words and I distinctly remember saying to myself, “Hmmm Lexy hasn’t gotten laid in a while. Better fix that.”

But I know that pacing is important and I was curious to see what exactly I’m doing and when I’m doing it. So, as I reviewed and revised my new book Glitched, I kept track of certain elements of the story and where they appear. This is what it looked like:

There were quite a few pacing relationships I was particularly interested in. Sex vs Romance is one of them. Maybe they’re not different for you, but they are for Lexy. At least in Glitched.

Also, Sleuthing and Skills. This fourth Lexy mystery is different in that alternating chapters are not in Detective Malick’s POV. In fact, the murder isn’t even Mike’s case. This is the first time that Lexy is actively trying to solve a murder. Now, she hasn’t hung out a PI shingle, and she’s still working at Xenon full-time, but neither is she stumbling on evidence or just lending Malick a hand. In this book–and going forward–it’s important for Lexy to have agency. For her to do things on purpose with intent instead of have things happen to her. Ergo, sleuthing is when she’s investigating the case: talking to witnesses, doing research, staking out a location. Skills is when she’s purposely trying to improve her sleuthing. Mainly recalling something she’s learned from Malick about being observant or getting reluctant witnesses to talk.

When you’re writing a series there is also a fair amount of Backstory or references and reminders to what has happened in previous books, and Set-up, laying the groundwork for the next book: introducing characters and situations who will be important in Lexy 5.

A couple other things I tracked were Humor and Trouble. Humor’s pretty obvious, and there are funny (I hope) Lexyisms throughout, but these were situations I included solely for comic relief. Trouble refers to situations when Lexy purposely does something knowing it will get her in trouble or stir the pot. Just because she’s Lexy. 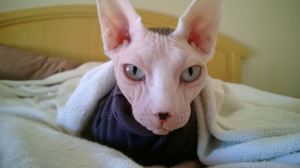 I also tracked her use of drugs and alcohol, and her smoking. She’s always been a closet stress-smoker and when she’s upset she indulges. If you check the grid, you see that she smokes less as the story continues. Is it because I forgot to put a cigarette in her mouth? Nope, it was that she was busy chasing baddies and had other stuff on her mind.

Looking over this, it occurs to me that I did a pretty fair job pacing this without much planning. The question is, do I want to track as I go with the next book (potentially leading to “hmmm Malick hasn’t gotten laid in a while” thoughts) or do I just keep on keepin’ on?