I have always hated my hair. It’s curly, for one thing. And growing up in the 1980s, curly meant frizzy. We didn’t have flatirons or smoothing serum or special no-poo shampoo that didn’t dry out your locks. The only weapon I had against frizz growing up was letting my hair air-dry instead of blowdrying it. In short, my hair looked like absolute shit for a large portion of my life. I spent my early twenties relaxing my hair with drugstore kits.

What’s more messed up: My curls or my poncho?

People always told me “Oh people pay a fortune for curls like yours” and “You’ll love them when you’re older.”

Nope. Never did. What I learned to do was wrestle them into submission. To wage warfare with chemicals and hardware. How could I control my life if I couldn’t control my hair?

If you’re of a newer vintage, you won’t remember a world without JLo and Beyonce and a myriad of diversely beautiful successful women. When I was growing up there was one standard of beauty and it was tall thin and blonde. If you didn’t look like Christie Brinkley or Cheryl Tiegs you were doing it wrong. The craziest thing to happen back then was Cindy Crawford. Her success was a game changer because she was a brunette. That’s right, brown hair was a big damn deal. 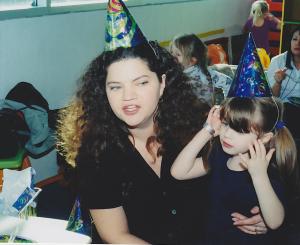 What am I working up to? Well, I’m gonna lose all my hair approximately 21 days after my first chemotherapy treatment. Why 21? Because that’s the time it takes for your hair to grow from the root to the scalp. I don’t know if it’s going to thin first or just come out in clumps, but the end game (for now) is that I will be bald. I will also–because of the particular meds my oncologist is prescribing to kill my cancer–lose my eyebrows and eyelashes and well, everything else. I try to keep a sense of humor about this. I talk about drawing on eyebrows with a Sharpie or sticking two fuzzy false mustaches above my eyes.

What’s not a joke is that I’m going to look bad. Like really bad. Worse than I have ever looked in my life. And while I wish I could say I’m above vanity and ego…I’m just not.

Here’s another thing I’ve learned about chemo that I had wrong. When I thought about cancer before I thought “bald and skinny. Well, at least there’s the skinny part.” Wrong. They prescribe steroids to conteract inflammation. And these days most people gain weight during chemo. Imagine that: puking your guts out, yet gaining weight. Fun, right?

I don’t want to get into it too much, but let’s just say my BMI isn’t what it used to be. I’d say I’m still hanging onto the baby weight, but the baby is turning six so I think I have to own the extra weight. It’s no one’s fault but my own. I eat too much and exercise too little. Like the vast majority of Americans. But I’m sensitive about it, as many people are. I actually avoid going places I may see people I know because I’m ashamed of the way I look.

The way I look with all my hair and no steroid weight! Not the huge, bald, eyebrowless, maggoty-looking creature I see in my future.

My curly hair in Singapore

My curly hair in Cancun. Supermodel, she ain’t. But does she deserve a decade of harassment?

Am I making too big of deal out of all this? Sure. But before you judge me as frivolous or lazy (people looooove to judge others for their weight, don’t they), you should know this. When I worked in the video game industry, my image appeared on people’s TV screens all over the country. And a lot of people didn’t like what they saw. I was too fat and ugly to live in their estimation. I was so hideous that they threatened me with death and rape. Because my face and body were an insult to their eyes. 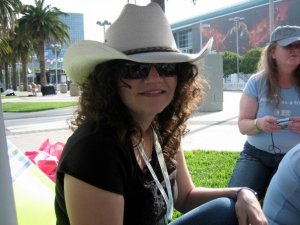 My curly hair at E3. This is the girl that gamers deemed so hideous and obese I should be raped and killed.

Over time, that shit had long-term effects. Like, I refuse to let people take my photo. I have to control the image. I get nervous in crowds sometimes, especially if I see cameras.

But this was all long ago, Christa, why bring up the past? Because of things like this. The last time I made a blog post I saw that the vast majority of the traffic came from Twitter and Facebook. But there were a couple of outliers and I’m always interested in how people find this blog. So I clicked the link and found this.

This will exist forever and there are dozens more exactly like it and much, much worse. How would that effect your self-image if it was about you? Some of you reading that might even have chuckled at it. Would it be funny if it was about your daughter or your wife?

So yeah, I’m fucking sensitive and fragile and all that. And being bald isn’t going to do me any favors in the looks department and I’m going to have to live in my disgusting body for several months without even my hair to hide behind.

I didn’t mean for this post to be such a downer. I meant to say that on the eve of its destruction I have, at long last, learned to love my curls. It will be several years before it is this long again, and it may come back a different texture. My unruly mass of dark hair is my defining feature (well, that and my rack, which is another impending loss) and I decided to give it a glorious send-off by having it colored a vibrant fuck-you purple. 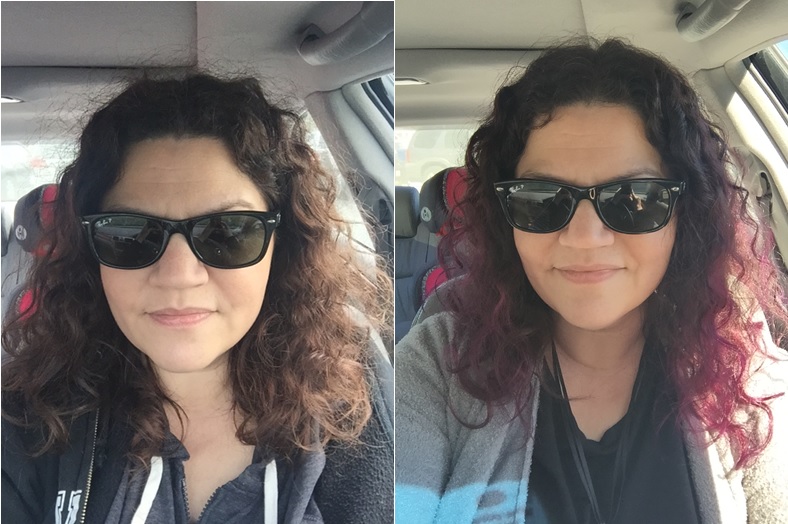 Before and After the Purplesplosion.

Next week is wall-to-wall medical shit. Two more biopsies (I predict the left boob is a false alarm, but that the cancer has spread to the lymph node in my right armpit), an echocardiogram, and surgery to install the mediport. I watched a video of the procedure on YouTube, which may have been a mistake.

It is strange that right now cancer is having its way with me but I feel physically fine. Next Monday I will begin to feel ill in order to get better.