Usually, I’d think about updating the blog and then I’d say, “Well, I’ll wait until I have more energy. Until I feel a little bit better.” But this time, I’m not doing that. I’m going to write this post when I’m at my lowest point because that’s part of cancer too. Not just the “big moments” of shaving your head or your friends cheering you on, or the first round of chemo. I’m talking about the shit in between. That’s what today is about. I had my third round of chemo last Thursday and then a weekend filled with birthday celebrations and wonderful friends. Today I don’t feel like a warrior. I don’t feel like I’m doing battle. I feel weak and useless and yes, a little fragile. 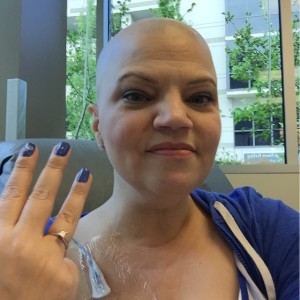 I’m beginning to suspect that the chemo side effects are cumulative. Like they might get worse with each round. And I further suspect that no one tells you this because it would be too discouraging. Well, I’m going to tell you: this sucks ass. I don’t think I’ve ever felt this bad in my life.

My stomach…oh man. It’s just so unhappy. It’s not that food is unappetizing, it’s that everything–including plain water–tastes absolutely vile. It’s not even nausea anymore, maybe, or I’ve forgotten what it feels like not to feel like shit. The bone pain is the worst it’s ever been, too. Usually I get it in my hips and a hot bath and Tylenol take care of it. This time it just keeps hurting and it’s in my shoulders too.

And the hot flashes from the chemo-induced menopause? Those are fun. Every 15 to 20 minutes ALL NIGHT LONG I wake up and either throw all the blankets off, or put them all back on. And the fatigue? I guess that’s what it is, though it feels more like weakness…it’s overwhelming and I’ve become rather addle-brained in the last few days as well. Today, I nearly walked into the back of a car that was reversing in a parking lot. The most annoying thing is that it’s summer time! I have stuff to do! I want to be out and doing stuff instead of cowering in my bed feeling sorry for myself. I have the girls’ bedroom to redecorate but I can stand up long enough to fold a basket of laundry. And, and, fucking and…

Anyway, this is the view from halfway through chemo. I was really excited to hit that milestone, but it’s getting harder to see a time when all this cancer shit will be behind me. I spent some time speaking with Dr. Cap before chemo last week and we talked a bit about surgery (though he’s not a surgeon) and stuff. I was under the impression that if I had a mastectomy instead of a lumpectomy (remove the whole breast, not just the tumory bit) then I would be spared radiation. But Cap says with this cancer–and because my lymph nodes are involved–we’re throwing the kitchen sink at it.

So I still have to figure out what to do with my boobs. I mean, let’s consider the options: I can have a lumpectomy and hopefully my right boob won’t be too disfigured. I can have a mastectomy and then have reconstruction. But then, like, I have lopsided tits? One that’s a wonder of modern science and one that’s fed three kids? No thanks. What about skipping reconstruction altogether? But what the fuck do I do with one boob? Just for shits and giggles go Google “breast reconstruction after mastectomy” and see how those images grab you.

I told my mom that my strong feeling right now is to lop both troublesome fuckers off and just be flat-chested the rest of my life. She seems to find this mildly horrifying. Maybe because, at 74 years old her rack is still pretty impressive. But I like the idea of wearing tank tops and spaghetti straps. I feel like I’ve been a prisoner of my boobs since the tenth grade and what freedom! But maybe I’m deluding myself.

Then I asked Dr. Cap a question that may be actually deranged. I’m fully expecting this treatment to work and that at the end of this process I will be NED (No Evidence of Disease) aka cancer-free. What concerns me is the possible return of the cancer. Because once you’ve had it, the chances it will come back increase. I asked Dr. Cap, basically, Should I leave a boob for the cancer to get if it wants to come back? So it doesn’t go for my liver or brain or bones? “Because,” I told him, “if it comes back somewhere else, I’m fucked.”

“Well, I wouldn’t say you’re fucked,” Cap said, which tells you how comfortable he’s become with me and my weirdness, But he did allow that in that eventuality we call the cancer incurable but that many women can live ten years with a stage 4 diagnosis. “But, you’re only 46. That probably doesn’t sound that long.”

How do I make myself as invulnerable as possible? How much piece of mind can I purchase with chunks of my body? Because I’m willing to give whatever it wants. Take my boobs, take my ovaries, take my uterus…I don’t give a shit, I was done with them anyway.

Anyway, I have wonderful people supporting me and pulling for me, and I don’t mean to be a downer or disappoint them. But this is for you, future reader, who maybe feels the same way and then feels guilty about dropping the Go! Fight! Win! pompoms because you feel like ass and just want all of this to go away.

Fuck you, cancer, for ruining my summer!

15 thoughts on “Chemo – The Halfway Holla”