If Cancer is a battle, this is my letter home, written in a fetid trench with bullets whizzing above my head and a tang of mustard gas mixed in the air with smoke and death. 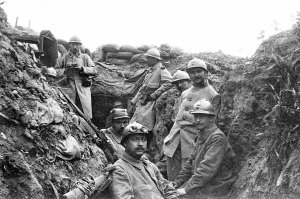 I’ve been doing a lot of thinking lately. Thinking some pretty heavy thoughts about the human experience. About life and death. Big picture philosophical stuff, sure, but also MY life and MY death.

Oh! I imagine you saying. Don’t do that! It’s important to stay positive! To think healing happy thoughts!

Fuck that. I have a right–I’d even argue I have an obligation–to ponder these things. And lest you think I’ve been turned morbid since being diagnosed with Stage II breast cancer in March, I submit that I’ve always been this way. I was the kind of child that lay awake at night worried that if I fell asleep my heart would stop beating. That cried over the Earth’s fate to be eaten up by the expanding sun in a few billion years. That worried that I had no real agency…that myself, my family and everyone I knew were just dolls in a giant gorilla’s dollhouse.

Stopover in a Small Town

So. I’ve been thinking about death. And the way I want to spend the time I have. To be clear, I don’t think my death is imminent. I fully expect to be alive in five years. I will either be healthy and cancer-free, this nightmare behind me. Or the cancer will be back and I will be doing this shitty dance all over again. Maybe it’s the months of being worn down by chemo, but my gut tells me that this fucker is going to get me in the end. Maybe it’ll take ten years. If you belive that just thinking that thought is going to make it come to fruition, I will point to my long-held and quite firm belief that I would one day be Mrs. Bruce Springsteen and/or write the Great American Novel.

I may feel differently in a year or even a month! But today, I no longer feel confident in a long happy retirement cruising the country in an RV with Gunny. Or hosting Christmas dinner for a rowdy table full of grandchildren. On the upside, I also don’t foresee a lonely cat-food eating dotage.

So let’s say I don’t get the Golden Years. If I have a decade or so, what do I want that to look like? What becomes important?

The first thing on my list is family and friends. In making sure I nurture the most important relationships and let each person know how much I value them. I want to make a positive difference in each one’s life. Not for any kind of payoff…so they remember me kindly or whatever, but because love and friendship are the opposite of death.

The next one is doing important work. For me, that doesn’t include pushing video games on teenagers, or ghost-writing for executives, or parting anyone from their money. I’m not sure if it includes writing mystery novels. They’re important-ish to ME, but what do they add to the world? What I’m looking for is something that makes a positive impact on people. Even in small ways. I’ve been thinking a lot about the people who work in medicine. Who help people every single day–even if it’s just making an appointment or helping them navigate their insurance. Maybe I’ll end up writing books but volunteering at the hospital. My marketable skill is obviously writing, but I’m not sure if writing medical stuff would fill that need to make a difference with people. It feels more like I need human contact.

“Getting and spending, we lay waste our powers.” I first heard this poem by Wordsworth in tenth grade, in Mr. Saari’s Humanities class at Sammamish High School and it’s stuck with me. You wouldn’t know it to look at my stuffed-to-the-rafters apartment. In fact, just glancing at the books, gadgets, Funkos, LEGOs, t-shirts, shoes, DVDs and just….bullshit all around me you could definitely say I have laid waste my powers. And I’m done with it. I’m not sure what “job” will occupy me, but here’s what I’m not going to do: bust my ass hustling for more money so I can buy more shit. It’s empty. It’s meaningless. The idol of commercialism has feet of clay and I’m done playing the game.

Maybe it’s a sign of middle age, or maybe my subconscious knew I was ill before I found the lump in my breast, but in the last year I’ve been pondering the concept of the “Bucket List.” Don’t get me wrong, I’ve got places I’d like to see and things I’d like to do. But I’m not sure I see the point of checking things off. Do people think that when they die they submit their punch card and the more punches they have the better deal they get in the afterlife? 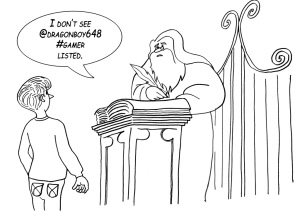 First off, I don’t believe in an afterlife. I think this life is what we get and then you’re done. You’re just gone. If I’m wrong and there’s some sort of conscious existence and I am allowed to watch over my family and protect them…AWESOME. I will be a diligent and devoted guardian angel/ghost/whatever.

If I end up in a lake of eternal fire? Well I guess that alleged deity of love and forgiveness will have the last laugh. But, if death really is the end, what does it matter if I visited Angkor Wat or learned to play the violin, or rode the Orient Express? Beyond the temporary happiness those experiences would grant during my lifetime?

The meaning, I believe, is just that: moments of happiness. It’s not the punch in your card or the photos on Facebook or the future conversational coup, it’s the right now when you’re standing there in front of it and the mystery and majesty of an ancient temple complex washes over you and you’re awed simultaneously by human achievement and frailty. That’s an awesome feeling. But so is driving to the grocery store on a sunny summer day with the wind in your hair and your favorite song comes on the radio. Just for a moment your heart is full. And what’s important to me is to pause. Just stop for a second and go “Yes. This is good. I am happy right here right now.” Because happiness is a series of moments. It’s not a rung on a ladder or a stage you finally achieve when you have everything and everyone you desire.

What all of this boils down to I suppose is that I have decided that the meaning of MY life is being kind, doing good, and recognizing and acknowledging happiness. That’s it.

Also, I’m thinking about getting a dog.

5 thoughts on “Mortality ‘n Stuff: A Letter From the Front”