Writing The Sleepless Nanny was not easy by any means, but plotting it was –dare I admit?– embarassingly simple in retrospect. The core story was one I had lived as a young au pair in New York City in the late 1980s/early 1990s. The sub-plots and side-stories were a mix of truth and rumors from nannyworld. I think the most taxing decision plot-wise was whether to start at the beginning or to reveal things more slowly through flackbacks.

This time around though? Yikes. I have a new respect for anyone who writes mysteries. All I knew when I started to write this book (I sort of want to reveal the name but I’m also afraid it will jinx it or someone will steal it) was who the victim was, who committed the crime and what the motive was. Since this is meant to be a novel in the neighborhood of 75,000 words and not a postcard, the path from “oh noez a body” to “you have the right to remain silent” must necessarily be twisted and difficult. 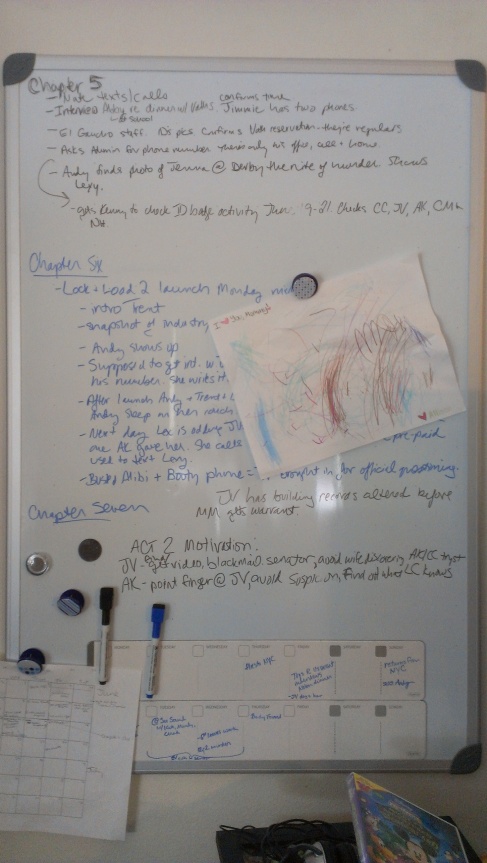 So I’ve had the task of deciding what evidence will be found and when and by whom. And if that evidence is valid or misdirection and if it points to the culprit or someone else. Through it all you must keep in mind the real world. What is plausible? More importantly what is interesting? How do I keep readers engaged and guessing without frustrating them with drudgery and/or red herrings?

I’ve got a notebook full of scribbles and a stack of index cards with plots and evidence and scratched out ideas. (okay, it’s not a stack, it’s a small blizzard that covers my desk, bookshelf and a bit of floor).

It’s tough but goddamn it’s FUN. It’s a fantastic challenge and brain teaser, and I’m the only one that knows the answer. But I can also change the rules of the game. If something’s just not working out I can go back and change the evidence. Dude’s alibi doesn’t match the evidence? Well I’ll just go back and change the phone records or the autopsy report. Bam! I’m in charge here. I keep a notebook and pen in the car because driving somehow frees my mind to snap to the answer to some elusive problem in my plot.

Here’s the dirty secret though: I know who’s going off to the pokey in the end. But I’m only about 75% certain how that’s going to come to fruition. The truth is I’m only doing serious plotting–bullet points for what I need to accomplish in each chapter and the scenes I will write to accomplish them–for two or three chapters out. So I’m about to start writing Chapter 8. The whiteboard next to my desk displays plot points for chapters 7 through 10 (though 10 only has one plot point so far–the discovery of a crucial piece of missing evidence).

E.L. Doctorow said “Writing is like driving at night in the fog. You can only see as far as your headlights, but you can make the whole trip that way.”

I’ll be okay as long as I don’t drive too fast.

One thought on “Learning to Plot”