In between the second and third Lexy Cooper books I did a crowdfunding campaign to fund a research trip. The trip wasn’t critical to my book; I had already budgeted money for the cover, editing, and proofreading. I didn’t have to travel to Roswell, but believed the book would be more authentic if I had first-hand experience at the location. The writing and publishing of Griefed was happening whether the crowdfunding was successful or not. That gave me the freedom to test the waters of crowdfunding without it being a make-or-break situation. The campaign ended up being very successful, and here’s what I learned. 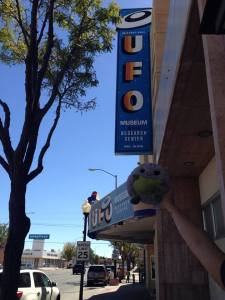 Indiegogo (and Kickstarter) will encourage you to make a video and cite statistics telling you a campaign with a video is X percent more likely to be successful. I’m sure that’s true for films and video games, but I don’t believe it for books. And yes, perhaps I just didn’t want to make a video because hosting a show on Xbox Live was enough video for me for the rest of my life. Video is essential for showing motion, but how will you show a book you’ve yet to write? Or maybe it’s written and you’re asking people to fund a book cover or printed copies or promotional costs. What can you show them? Your face, I guess. If you are fantastically good-looking and charismatic go for it. It will probably work to your advantage. Otherwise, enjoy the fact that it doesn’t (yet) matter what writers look like.

Let your donors or backers or angels know what’s going on during the course of the campaign and as you deliver the goods. Don’t spam or annoy them with updates just to say you’re planning on an update. Think about news beats. A good time to update is when you’re halfway to your goal, when you’ve met your goal, and as you use the funds you’ve been given. For example: I updated my Indiegogo page six times: 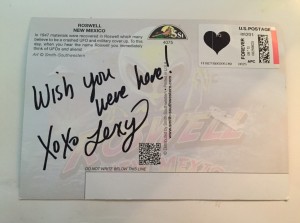 It was important to me that my backers felt like they got their money’s worth—long before the book came out. I made sure to get deliverables out to them as soon as possible. I never wanted anyone to have to wonder where their stuff was or if they’d been forgotten—or worse, ripped off. I also did some things that were not included in the Indiegogo perks:

4. Here’s why I think my Indiegogo campaign was successful:

My goal of one thousand dollars for the research trip was met in five days. By the end of the campaign I’d exceeded my monetary goal by over sixteen hundred dollars, and I had a wonderful and productive trip to Roswell. Sure, I may just have gotten lucky or been in the right place at the right time, but I think these factors contributed to the successful outcome:

Here’s my advice to writers regarding crowdfunding: Wait until you’ve got a book or two under your belt before you do it. I have seen many campaigns from would-be authors that fail for these reasons: