Normally, I would wait until I know more before making this post. But, this–the waiting, the not-knowing–is a large portion of this cancer dance. So, today, I went to the radiologist to do ultrasound-guided biopsies of stuff that showed up on my breast MRI a couple weeks ago. 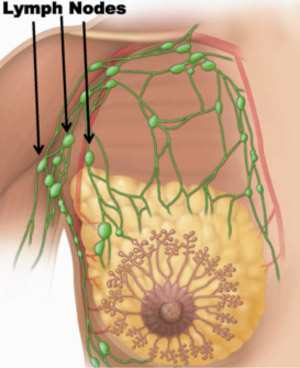 No biggie, I thought. I’ve done this before. I know what to expect. And I even had a prediction (left boob was a false alarm and lymph node in right armpit would probably be cancery). Here’s what I didn’t expect: it wasn’t one node they were looking at it was, according to two different techs “a handful” or “three or four.” Can you fucking count? I realize that techs usually can’t tell you anything because they aren’t supposed to make a diagnosis, but JEEZ. Is it five? Is it three?

Okay, so they’re looking at more than one node. I can deal with that. But here’s where it got freaky. One of the lymph nodes under my arm is GINORMOUS. It’s 4.4 cm. That is almost twice the size of Turdy the Tumor. Or at least his size when we did this ultrasound jazz back in early March. 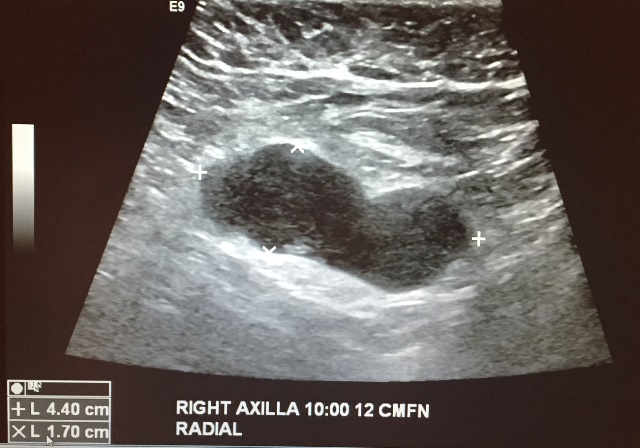 Dr Movie Star comes in to do the biopsy. We talked about Burt Reynolds and that cheesy killer bees movie that culminated in the Super Dome.

Was he going to stick a needle in all the suspicious nodes?
No, just the big one.
If the biopsy comes back cancerous, is it a tumor in my lymph node?
No, it would be a malignant lymph node.
Since this blob is bigger than the one in my boob is it possible that the cancer started there and moved to my boob?
It’s not impossible, but it’s not probable. It usually starts in the breast and moves to the lymph nodes.

Okay, so he did the biopsy and I got to look at the little wormy core samples that he’ll send to the pathologist. They don’t look evil.

My left boob thing? Dr. Movie Star couldn’t find it. Hooray, said I. Well, that means we’ll need to do an MRI-guided biopsy instead. Boo, said I. He also mentions that if the biopsy comes back bad (and I am fairly confident that is the case, because it’s extremely common for cancer to spread to nearby nodes) they will probably do a PET scan or CT scan to see if cancer is anywhere else in my body. This is when I saw the Eternal Footman hold my coat and snicker. And in short, I was afraid. 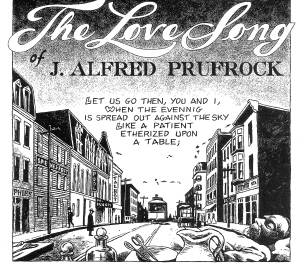 So yeah. I know I’m supposed to be all positive happy snappy blah blah bullshit, (and Oh! You should have seen my performance today. I was in full-on Trixie Mode. Cracking jokes, making small talk, calling everyone by name and telling Dr. Movie Star his techs should all get raises. Aren’t I a firecracker? Don’t I just have the BEST attitude, bless my little heart.)

Meanwhile, all I can think about is worst case scenarios. The cancer is everywhere. Every fucking where. I’m going to die. They’re going to do a bunch of scans and they’ll change my stage from 2A to 4, which as Dr. Boobcutter put it, is “game over.”

1. I’m starting chemo in six days. It’s going to work on killing cancer wherever it may be.
2. I don’t have any symptoms (but what about those headaches? Or how my back always hurts? Shut UP.)
3. I have an awesome medical team that is proactive and sympathetic.
4. I have health insurance. Yes, they may be slow, but Tricare has approved every single thing my doctors have ordered.
That’s all I can think of as far as the cancer. The other bright sides? It’s sunny today. I have two episodes of Mad Men waiting for me to watch. All three of my kids are healthy. I have amazing friends and family. I have this blog: a place to dump my fears and anxieties. The internet is forever and this blog may be my legacy.