I had my 13th radiation session today, but “dirty dozen” is much more clickable than “baker’s dozen,” don’t you think?

I met with Dr. Spiderman on Friday (the day after Thanksgiving) and he asked me, “So, how is radiation going? Is it better or worse than you thought it would be?” And I told him it’s much better. That I’m not really getting the fatigue I’d heard about, and the skin that’s being radiated looks exactly the same as the other, non-zapped side. Spidey, resplendent in a fuchsia button-down shirt, said, “Fine. Be that way.”

I joked back, “Are you sure the machine is plugged in?”

Just in the last couple of days have I started to feel tired. Like fall-asleep-on-the-couch-before-dinner tired. I don’t know if it’s the radiation, but it probably is. I haven’t been keeping track of my protein intake at all, and it’s supposed to be 60-90 grams per day. My appetite has been rather crappy, in fact. And speaking of crap…yep, it’s still cha-cha-cha all day err day. Not sure wtf I’m talking about? Click here. I’m not even sure I care all that much anymore. It’s just the way it is. 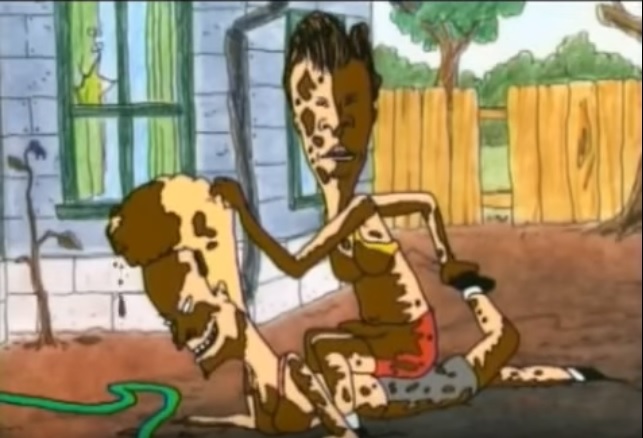 Hair update: It’s fuzzy and dark! It looks like hair!

Meanwhile, it’s the holiday season! I’m trying to be super excited, like when I was a kid, but I don’t think it’s possible as an adult. We had a wonderful Thanksgiving dinner at Snoqualmie Lodge, but driving back I was missing the old days when we (my mom, dad, brother and I) would go to my uncle’s house. We didn’t go home after the meal, but played board games and watched football and told stupid jokes until it was time for pie. Of course a couple sets of divorce and kids growing up changed all that, but each holiday I feel like something’s not quite right. Yes, some of the magic was recaptured when I had kids, and having a small person in the house who still completely believes in Santa and flying reindeer is about as good as it gets in Adult World. But I’m always unsatisfied on some level. Maybe everyone feels that way when they grow up?

This year, cancer and midlife crisis and my natural melancholy personality are combining to make…not Captain Planet, but something much worse. Let’s call it Captain Blah. And I feel guilty because there’s this expectation that I should be particularly hashtag blessed to have another Christmas with my family. And I AM, but…it’s just the same old shit. The same getting and spending. The same search for a ‘wow’ gift that the recipient will shove in a closet somewhere. I move a mountain of plastic garbage from the store to plastic bags to stockings and boxes (and eventually into a landfill). I organize the family into some kind of gathering and half-hearted gifts are exchanged and I get the feeling that no one really wants to be there; they’re just going through the motions because it’s what you do. Or they’re humoring me. Have I been forcing my desperate Christmas on my kids and parents all this time? I think I may have. The whole thing feels phony and wasteful, but I still try really REALLY hard to get into the twinkle lights and the music and the peppermint/pinetree holidaygasm. Does anyone over the age of 10 have magical Christmasses anymore? Are we all faking it? I’m not going to stop doing it, but I guess I’m just wondering if I’m alone in my Grinchdom.

Christmas isn’t the only thing I’ve been angsting over. Spending time in the city I grew up in (because that’s where I get treatment) has led me to drive past my old high school (remodeled and unrecognizable), the place I used to line up my quarters to play Donkey Kong (now a vitamin store), the parking lot I learned to drive in (now a –spit between my fingers to ward off the Evil Eye–Wal-Mart). I was even recently near my uncle’s old house where I had so many wonderful childhood holidays. It feels like a lost world. Like a place I can never return. I guess childhood is like that. But then as I was driving past my alma mater I remember that when I was going to school there I would often have the feeling that my life was just a dress rehearsal. Merely a preamble until my ‘real life’ began. I’m not sure when that feeling truly ended, but I know it lasted into my twenties.

And now here I am feeling as though my childhood was the real deal and I’m living some inferior reflection. Or something. And it’s difficult for me to engage in this shadow-world. It doesn’t feel quite real. I’m having trouble spotting the small joys because I’m drowning in the hate and violence (and I don’t even watch television news!)

Honestly? I think about death a lot. Every day. Why go back to school, or start a new career if I’m just gonna die? Why do anything for that matter? What, if anything, will matter once I’m gone? Please note: I have no reason to believe that I’m going to die in the near future. I mean,  yeah, I have a better chance of dying from cancer in the next five years than people who haven’t had cancer do, but I have no indication of imminent demise.

Am I happy? No. But am I supposed to be? Whoever came up with the idea that the goal in life is happiness? Human history is a steaming pile of not-happy. What makes us so fucking special that we think food and shelter aren’t good enough? Why are we compelled to gather designer shoes and iGadgets? Why is our grandest ambition to be on fucking TV?

This post kinda went off the rails. Sorry for that. So yeah. Radiation’s going fine. I almost worked on my book today. I’ve been doing a lot of thinking and plotting, which is a good sign. And, lucky me, I have a new writing assistant: the naughtiest kitten in the world. Maybe this should be my new author photo?

3 thoughts on “Radiation: The Dirty Dozen”