It’s sort of a funny story–now–but at the time it stressed me out so much I was losing sleep over it. My cover artist was missing.

I found Brett Parson by chance. I searched “book cover” on Deviantart and discovered his amazing work. I asked if he’d take a commission and he said yes. Two novels and a short story later, we’d accomplished this together:

The plan, of course, was to have Brett do the cover for the third Lexy novel, Griefed. I mean, why wouldn’t that be the plan–I’m not crazy! Pretty soon after he did the Christmas cover I sent him a preemptive email: “Hey, pencil me into your schedule sometime around the end of the year…” He didn’t reply, but it was more of a heads-up and didn’t require a response. In late October I fired off a more serious, “Let’s get rockin’ on Lexy 3” email. No response. Now, Brett’s completely professional, but he’s also an artist. And the artists that I know are not typically huge fans of email. So, I tried to be patient. I lobbed over a “moving this to the top of your inbox” missive the first week of December. Still nothing.

That’s when I started to freak out a little. I checked his Facebook (business, not personal) page and his gallery on Deviantart. He appeared to be alive and posting as recently as late November. Phew. I left him a message on Facebook even though I was fairly certain he rarely checked in there. I got nada back.

So I had to conclude that he hated me and didn’t want to work with me any more. By this time I had gone into full Swimfan stalker mode, and I was feeling as neglected and betrayed as I would if Brett had broken up with me. (And, I may have a touch of PTSD from dating an artist who would in fact drop off the face of the earth and turn up later like “What?”).

In the meantime, I’ve got a book coming out and it needs a cover. And if Brett and I have grown apart and he’s doing illustrations for some other girl (slut!), I’m gonna have to find a new boyfr– cover artist. So I put out a call on Facebook, and trolled Deviantart and came up with a couple of possibilities. I made tentative contact…these guys were talented…but they weren’t HIM. I don’t want a new artist, I only want Brett.

At this point, I do what any ninth-grader would do, and appeal to a mutual contact. “Do you have him on Skype? Is he online? Can you tell him I’m looking for him?” I seriously did all of that.

Well, Brett didn’t hate me; it turned out that all Gmail was blocked by his spamblocker so he hadn’t received any of my emails. I nearly cried with relief. Brett was back! He was on the job!

Now that we were ready to begin, I gave him this direction:

Brett came back with this first sketch, saying, “Here’s the layout sketch I came up with for the new cover. The colors are just for blocking, was thinking the cover could have dark red bg. If you’re not diggin it we can try something else, but I thought it channeled that old mystery pulp novel vibe better than all the others… let me know what you think.”

My first thought: Holy shit, she’s naked! The Schooled cover now seems almost tame as Lexy has gotten progressively nuder with each cover. Anyone remember Nipplegate? I reluctantly had to ask Brett to edit out her erect nipple on the Pwned cover. Then, the I Saw Lexy Kissing Santa cover…Lexy’s tits in Santa’s face caused two of my Facebook ads to be rejected (Which made me laugh and is awesome). But this…this was NAKED. And IN BED.

She was freshly fucked on this cover! I loved it.

Loved everything but the gun. Now, I love the gun on the Pwned cover and specifically asked for it. Lexy acquires a Glock 26 and learns to shoot in that book–it’s a pretty major plot point. But Griefed doesn’t feature firearms in quite the same way, and this is Lexy Cooper, not Dirty Harry. So I told Brett:

“Can we try something else besides the gun? How about a cell phone? Like a noise woke her up and she hears someone in her house and is calling for help? That could be a really interesting thing with light from the phone. Also, love the noose, but can we do it as the shadow of a noose, so it doesn’t suggest that Lexy is about to hang herself? REALLY love her tousled freshly-fucked hair, and the wary expression is absolutely perfect!”

Brett came back with two versions of cell phone and noose. 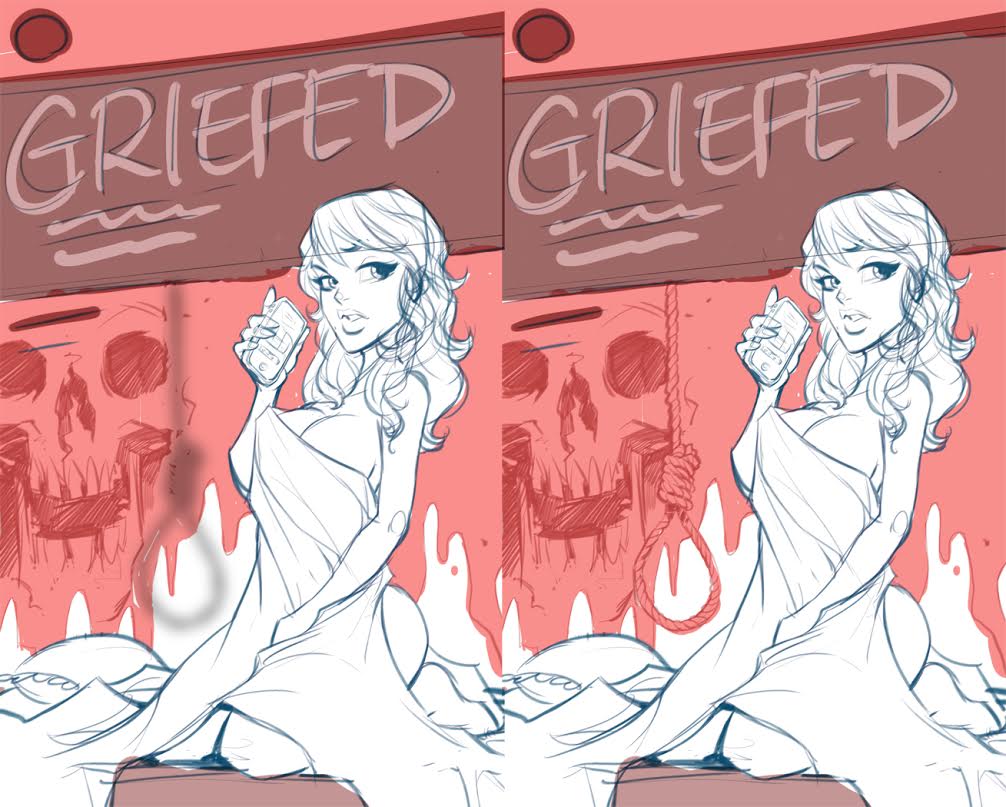 Brett said: “Here are the layouts with the gun switched to cell phone, and a shadow of a noose version, and the red background noose version. The colors of Lexy I thought would be cold and night time style. Desaturated and a little blue. and the noose and skull would be different shades of red blending into the dripping blood.”

I told him the shadow noose was exactly right. Do you know the Springsteen song “Mary Queen of Arkansas?” It includes these lyrics:

But on your bed, Mary, I can see the shadow of a noose
I don’t understand how you can hold me so tight and love me so damn loose

So, on to the final version he went. Here it is: 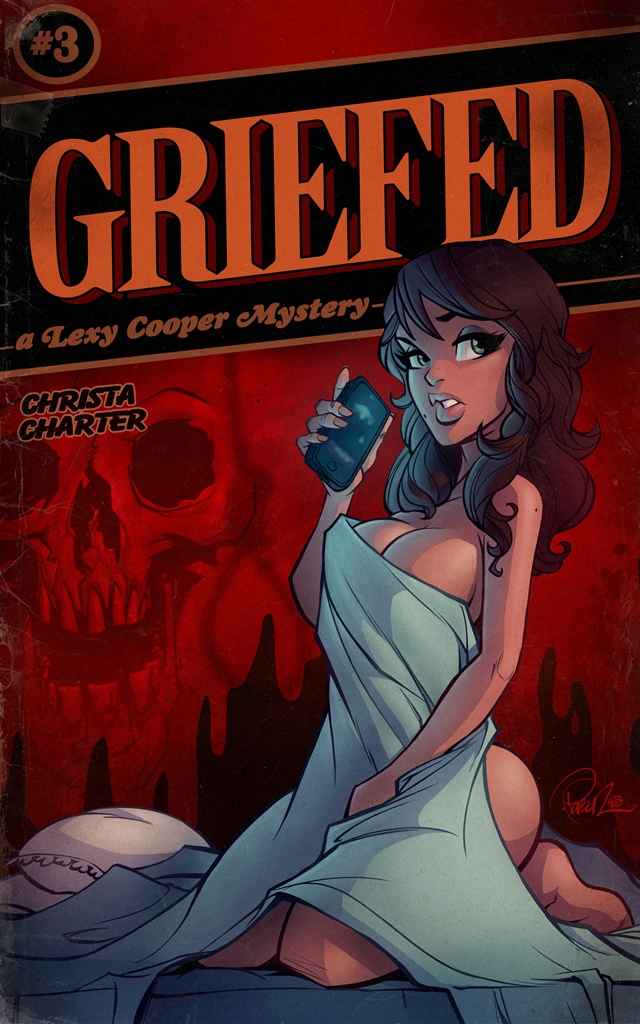 I think it’s the best Lexy cover yet. The contrast of warm and cool colors, Lexy’s expression, and the overall sense of “Shit’s about to go down,” perfectly capture the content of my novel. Griefed will be available in February 2014.

Brett is an amazing artist. He does take commissions, but if you steal him from me I will cut you.

3 thoughts on “The Art of the Cover – Griefed”